A knowledge graph represents a network of real world entities that are objects, events, situations and concepts, also how they are related to each other. In knowledge graph this information usually structured in graph. The three main component of Knowledge Graphs are Node , edges and label. An object or a person can be a node, edge defines the relationship between the nodes. Edge defines the relationship between two nodes. Knowledge graphs are typically made up of datasets, schemas, identities and context work together to provide the structure a valueable meaning. Schemas provide the structure to the knowledge graph, identities refers as nodes, and context refers to the knowledge. Knowledge graph use Machine Learning and Natural Language Processing to construct a view of nodes, edges and labels. ML and NLP helps to identify individual objects and relationships between different objects. This knowledge is compared with other datasets which are similar in nature. Once a graph is completed it gives answers to given queries. 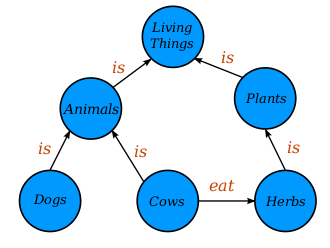 In knowledge representation and reasoning, knowledge graph is a knowledge base that uses a graph-structured data model or topology to integrate data. Knowledge graphs are often used to store interlinked descriptions of entities – objects, events, situations or abstract concepts – while also encoding the semantics underlying the used terminology. Since the development of the Semantic Web, knowledge graphs are often associated with linked open data projects, focusing on the connections between concepts and entities. Some early knowledge graphs were topic-specific. In 1985, capturing semantic relationships between words and meanings – an application of this idea to language itself. In 2005, to capture relationships between different geographic names and locales and associated entities.In 1998 a system, that offered fuzzy-logic based reasoning in a graphical context. In 2007, both DBpedia and Freebase were founded as graph-based knowledge repositories for general-purpose knowledge. DBpedia focused exclusively on data extracted from Wikipedia, while Freebase also included a range of public datasets. Neither described themselves as a ‘knowledge graph’ but developed and described related concepts. In 2012, Google introduced their Knowledge Graph, building on DBpedia and Freebase among other sources. The Google Knowledge Graph became a successful complement to string-based search within Google, and its popularity online brought the term into more common use. Since then, several large multinationals have advertised their knowledge graphs use, further popularising the term.

There is no single commonly accepted definition of a knowledge graph. Most definitions view the topic through a Semantic Web lens and include these features:

There are, however, many knowledge graph representations for which some of these features are not relevant. For those knowledge graphs this simpler definition may be more useful:

A knowledge graph formally represents semantics by describing entities and their relationships. Knowledge graphs may make use of ontologies as a schema layer. By doing this, they allow logical inference for retrieving implicit knowledge rather than only allowing queries requesting explicit knowledge. In order to allow the use of knowledge graphs in various machine learning tasks, several methods for deriving latent feature representations of entities and relations have been devised. These knowledge graph embeddings allow them to be connected to machine learning methods that require feature vectors like word embeddings. This can complement other estimates of conceptual similarity.